With an album title like Morning, the easy opening is to whimsically discuss the sun coming over the horizon and use a metaphor or simile or some other form of language manipulation to compare the dawning of a new day to Abrams somewhat youthful existence. Equally easy is to discuss the existence of the sophomore slump (check out their debut Lust. Love. Loss.) and how when a second of anything is lesser than the first we chalk it up to a learning experience. In this case, such an opening would conclude that Abrams have avoided such a slump… Obviously, as we reach a good number of words in the introduction, I have neglected to write either opening and in the process not informed the reader of the album’s merits. As such, this opening should be viewed as an abject failure but, I do urge you to read on because Abrams have delivered quite the treat with Morning and, instead of typing with no purpose, I have composed some words on how Morning graced my eardrums.

Like a heard of elephants dancing on your skull, Worlds Away blew the doors open on Morning. Pounding and inescapable the drums and riffs were downright ugly in their heaviness and the vocals, most improved since Abrams’ debut, were gorgeous in their harshness. A wall of sludge in its entirety, screeching bends and drum fills at its close attempt to break up the oppressive heaviness of the track. Sludge is alright on its own but, eventually, the elephant marching gets tiring and the vocal delivery mundane; thankfully Abrams had no thoughts of being mundane. The angular riffs to open At the End were like an electric shock to the system and the perfect transition into heavy Queens of the Stone Age riffs nearly brought me to my knees. At the End flipped from stoner rock to sludge metal flawlessly and left me gasping for breath in my wonder. After the sludge and angularity of the first two tracks, 18 Weeks brought more happy surprises as it was less forceful and more emotional. Almost post-metal in the approach it delivered an overwhelming atmosphere in which the vocals provided emotion; desperately reaching for notes. Like an outro to 18 Weeks, Rivers continued the same vibe and ended the unexpected stylistic change ups. Essentially a victorious indie track, Rivers was poppy and swingy with rolling drums and light guitars creating a humming atmosphere. The soft pulsations of Rivers left me craving elephant marching riffs as the closing solo nearly got lost in the atmosphere. As I was craving, so Abrams delivered. Out of the restrained atmosphere Can’t Sleep returned Morning to its angry, grungy roots. Reigning in the angularity the drums and vocals were able to intertwine and echoing vocals created a feeling of building up which failed to peak until the opening drum solo of Burned. Out of the drum solo Burned mixed angular and meaty riffs with tasty drum fills which gave way to psychedelic chimes and lilting guitars. 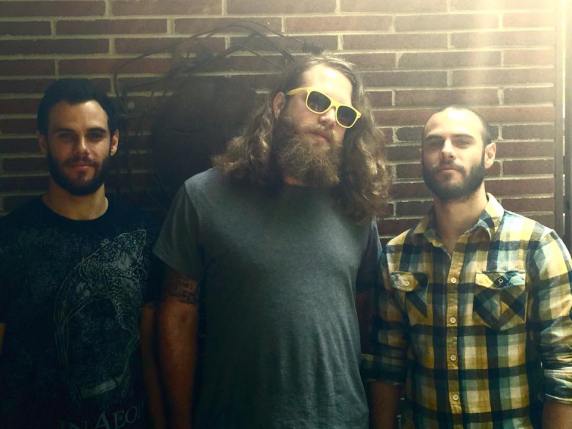 Ever building, Mourning can best be described as a sludge ballad. The slowly picked opening and playful cymbals mixed with vocals that are sung, harmonising at times, rather than belted. Beautiful in its entirety Mourning linearly gets heavier until it reaches an effects soaked shred solo. A bass intro which leaves some wanting kicks Die in Love into dissonant leads and drums which roll like thunder. Zach Amster and Taylor Iverson trade harsh and clean vocals atop the dissonant running leads which close with another shredding solo. In This Mask plodded to the closing track with slow drums, picked guitars, and a sparse but powerful bass line. Aligning with the monotony of In This Mask, Morning opened with chill picking which caused me lose some faith in the album. Yet, when the track hits, I was riveted in awe. Teasingly the bass and drums joined the guitars then the vocals came in with soft echoing cleans before suddenly they dropped the echo and exploded with “I AM BURNED BY THE SUNLIGHT”. This line is etched in my brain, a smile broke my face at its utterance and the album shot above its previous peak. Honestly, if Morning had closed there I would have been happy but the titular track kept getting better with an airy solo and looping angular riffs to close.

Abrams EP, February, was good and debut, Lust. Love. Loss., was fun but goodness gracious, Morning takes things to a new level. Able to do it all, tracks like At the End and Burned fill your body with their sound and cause your foot to tap with their undeniable groove while tracks like 18 Weeks and Morning fill your heart to bursting with emotion. Thank god the dawn is just breaking on these Coloradans career cause it is going to be a bright one.